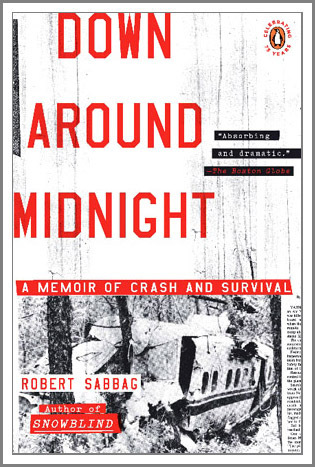 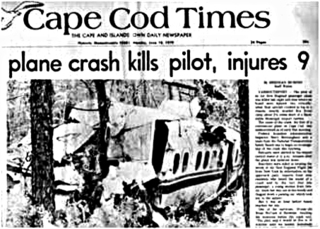 To most readers, Sabbag is known primarily as the author of Snowblind (1976), a book about a cocaine smuggler that catapulted its author into the public eye. In June 1979, at the peak of his celebrity, Sabbag boarded a twin-engine plane for a flight from New York to Cape Cod. The plane crashed, killing its pilot. Eight passengers survived. Now, 30 years later, Sabbag writes about the event in what might be his most emotionally resonant book. There are a lot of books about plane crashes, but not many of them are written by someone who was on board; this point of view offers readers an opportunity to learn, firsthand, what it’s like to go through a massively life-altering experience. Sabbag writes movingly, with painful honesty, about the terror of the crash and the daunting task of putting one’s life back together. He writes about his fellow survivors not as clichéd movie-of-the-week heroes but as real men and women who drew on hidden reserves of strength, risking their own lives to make sure everybody got out safely. A remarkably powerful, human story not merely of a plane crash but of the impact that one brief moment can have on an entire life.”

"A compelling mix of reporting and memoir... [it] packs an emotional wallop."

DOWN AROUND MIDNIGHT
pages 5-7
The woman’s name was Suzanne, and she was one of seven other passengers with whom I’d boarded the plane that night when I left New York to return to the Cape. “A petite, brown eyed brunette,” as the local newspaper would later describe her, with straight, shoulder- length hair, dressed entirely in white, she was a nineteen- year- old college student, a Rutgers University sophomore, and she was the only passenger to whom I had spoken at any length prior to the crash. Summering on the Cape with her family, she had been visiting friends in New Jersey, celebrating her birthday. She had planned to drive, but as a birthday gift, her parents had bought her a round- trip plane ticket. We were sitting next to each other, on opposite sides of the aisle, and when the announcement signaling our descent to Hyannis put an end to her socializing with some other students on the flight, she engaged me in conversation. She was a chatterbox, maybe she was nervous. She wanted to know what I did for a living and what kind of car I drove. She advised me to tighten my seat belt. I had been wearing it, in airline parlance, “loosely fastened about the waist” for the duration of the flight. I must have been slow to follow her advice, because I remember her reaching across the aisle and pulling it tight herself.
To a question I’m asked invariably, the question posed in first position more often than any other, the answer is that the crash came without warning. There was no time in which to be terrified or ponder the state of one’s soul, to inventory the events of one’s life as it passed before his or her eyes, or to calculate assets and liabilities pertaining to one’s standing with God. The plane was at five thousand feet, maybe twenty- five miles southwest of Barnstable Municipal Airport in Hyannis, when the voice of the captain or maybe the first officer came over the cabin speakers with the announcement that the plane would be touching down in ten minutes; we were instructed to extinguish any cigarettes and fasten our seat belts in preparation for landing. Suzanne and I said hello, we talked for a little while, she tightened my seat belt, our conversation eventually trailed off, and we along with the other passengers retreated to the privacy of our thoughts as the aircraft descended through the final stages of the approach.
The temperature at the airport that night was sixty- seven degrees Fahrenheit, with a ten- knot breeze out of the southwest. Visibility on the ground was three quarters of a mile in fog and light drizzle, sky obscured, with an indefinite ceiling of two hundred feet. The moon was in its last quarter but lost to view in the weather. A glance to my left as we descended through the clouds revealed no more than my reflection in the window. The only evidence of forward progress was the occasional dip brought on by turbulence and the direction of the water streaking the glass. Beyond the window there was nothing but the black of an invisible night and the hypnotic drone of the turboprop engines, an insistent, monotonous hum to which I inevitably surrendered, slipping into that easeful state of interrupted animation familiar to anyone who has ever fl own or been rocked to sleep in a cradle.
If, in those final ten minutes before facing potential death, I pondered anything at all, it would not have been the state of my soul but more likely the indignity of an empty stomach. I had arrived at LaGuardia before dinnertime as it is commonly observed in Manhattan. The flight was leaving out of the Marine Air Terminal— used to accommodate commuter airlines and as a general- aviation facility— and the only source of sustenance there was a poorly maintained candy machine, its age and condition suspiciously suggesting a shared provenance with the Art Deco building itself. Had I died, I would have died hungry. And tired. There is no one aboard an airplane in the hours that Hamlet in his madness calls “the very witching time of night” who isn’t beat.
In the ten minutes following the landing announcement, there was no hint of what was to come. There was the somnolent drone of the engines, the beads of moisture scarifying the window glass, perhaps a slight increase in cabin pressure, and the prospect finally of home. Then impact. In the interval of a heartbeat. Lights out. You don’t own it. I breathed in, fairly unmindful of any real sense of forward progress, and when I breathed out I was pulling six g’s. Angling in at seven degrees, four degrees off the glide path, coming out of the sky at a rate of descent of 1,500 feet per minute, the airplane hit the trees at a velocity of 204 feet per second, breaking out of the cloud cover about two seconds from contact.
Time never had a chance to stand still.

Reprinted by arrangement with Viking, a member of Penguin Group (USA) Inc., from Down Around Midnight Copyright © Robert Sabbag, 2009